Rather than publishing a standard post about one of my favorite topics (such as Magento, security or caching) I’ve decided to do something special.

Here I’ll chronicle a 4 year journey starting with my very first blog post in December of 2013 leading up to the present day with my 100th blog post.

I had found that the default <iframe> embed would load ~400k of data even if the user had no intention of watching the video. The post compares various tools and techniques that had been created to allow for more performant YouTube embeds, including a jQuery plugin I created at the time, aptly named, jquery.nonSuckyYouTubeEmbed.

I can remember publishing the post well. I had high hopes that this would get the ball rapidly rolling for me to make a name for myself in the web development industry. I submitted links to the post to a few newsletters in hopes that they would publish them.

Unfortunately, I got pretty much no feedback on the post

While the response was disappointing to say the least, it didn’t completely turn me away from blogging. Over the course of the next 27 months (December 2013 to March 2016) I published 8 more blog posts.

Here are a few of the things I published about…

Beginning in April of 2016, however, I hit an inflection point in my blogging. 91 out of the total 100 posts that I’ve written were published from that point on.

Here’s a graph, which shows the number of posts published per month, to visualize this. 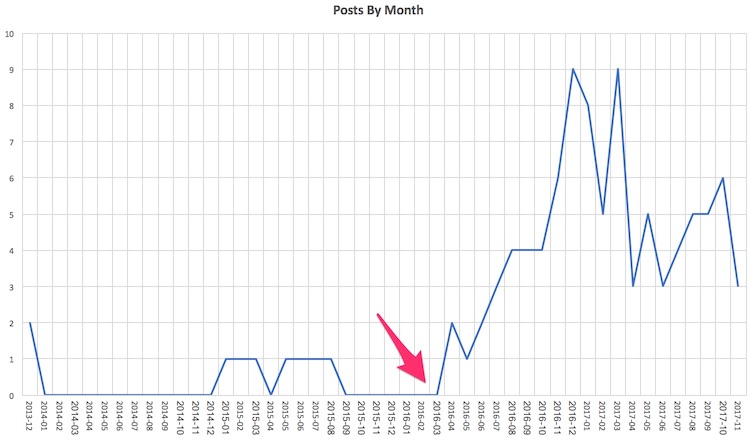 You can see a rapid rise in my publishing activity leading to a high of 9 posts in both December of 2016 and March of 2017. Publishing activity has leveled off a bit since then, but still averages over 4 posts per month.

To be honest I’m not entirely sure of this myself. I’m a self taught developer who started in 2011. In April of 2016 I’d been doing web development for roughly 5 years. Perhaps it was only then that I felt “qualified” to be publishing on my blog1?

A few other worth noting…

I hope my readers have enjoyed this post and I encourage everyone else to try out blogging! See you again in post 101.

1 . At this point, I think the notion of being “qualified” to publish is complete BS. Having content published by complete beginners is just as valuable as content published by experienced developers. I would encourage everyone to write about what they do as a developer and publish it to the web, regardless of their “qualifications”.↩