mod_log_config provides many useful ”%” directives for defining CustomLog formats. In combination with its friend, mod_logio, 99% percent of logging use cases are covered. However, one day, you may find that there’s something you want to log that is not accessible with the tools Apache provides you. Luckily, you can utilize Apache’s module system to add your own logging directives. In this guide, we’ll write an Apache module that adds a %^IH % directive which records request header size, in bytes.

A foreign key constraint is defined by Wikipedia as follows…

A field (or collection of fields) in one table that uniquely identifies a row of another table or the same table.

Sounds pretty technical, right? Frequently, a developer uses his or her judgement when planning the architecture of some feature to decide when a foreign key is appropriate. However, I had an experience today where I learned that often, foreign key constraint enforcement is a business decision rather than a technical one.

If you work as a PHP developer this is probably a question you’ve asked yourself before. There are quite a few guides you’ll find online in regards to this subject. 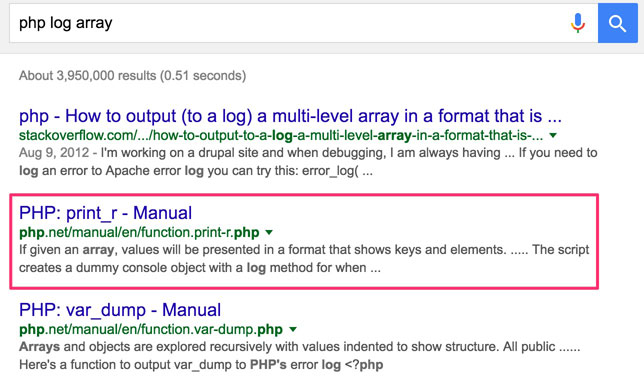 So why, exactly, does print_r suck for logging? Allow me to elaborate.

Recently, I caught wind of an issue which was reported by the client as follows…

Customers are getting error screens stating that their request was blocked.

At first glance, it smelled like an issue at the WAF (web application firewall).

A quick call with our hosting provider later, we confirmed that requests were, indeed, violating the WAF’s “max header size” policy. Let’s take a look at the what and the why.

I recently built jekyll-migrate-permalink, a tool to help deal with the side effects of changing the permalink of a Jekyll blog.

The plugin was spurred by my own contemplation about removing the /blog prefix from the URLs on this blog, an action which, at the time of writing this, I still haven’t taken. If you just up and change URLs, you’ll wind up with a bunch of backlinks that 404. jekyll-redirect-from can help with creating redirects, however it requires updating the front matter on all existing posts with a redirect_from element referencing the old URL. Doing this manually is a lot of work, and error prone. So jekyll-migrate-permalink was born as an attempt to make this process less painful.

While Ruby isn’t my most comfortable language, I decided to build it as a custom command Jekyll plugin (rather than e.g. writing in PHP, which I work with every day). The benefit of writing the tool as a Jekyll plugin is that it allows access to the same primitives Jekyll uses when it compiles a site.

In the process I hit quite a few stumbling blocks. While other types of plugins just allow you to drop an .rb file into a _plugins folder in the root of the site, with commands, your plugin needs to be turned into a Gem. Maybe I just don’t know the right terms to Google, but I had a lot of trouble finding resources to help me through the process. Now that I’ve released the plugin, I decided to publish a guide for creating a simple custom command Jekyll plugin, putting everything I learned into one place.

After reading through the beginning of Andrew Blum’s, Tubes last night, I decided to spend some time today playing with traceroute. I was initially exposed to the tool via Pingdom’s root cause analysis feature, which captures a traceroute when it detects a downtime incident for diagnostic purposes. In the past, I’ve always been a bit confused about how to actually interpret the traceroute results. But, as of today, I feel pretty good about my understanding. In this post, I’ll share what I’ve learned for anyone else struggling to make sense of traceroute.